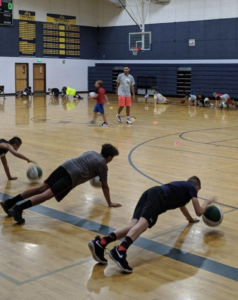 Adrian grew up in Modesto and is a former Slam-N-Jam player. He went to Modesto Christian HS, where he was instrumental in winning a state championship in 2004. He was awarded the Stanislaus District MVP in 2005 & 2006. He was also awarded the Sportsman of Stanislaus Outstanding Athlete High School Player of the year in 2007. He turned down offers from Gonzaga and Kentucky and attended the University of Washington (2006-07). He transferred to San Jose State University (2008-2011) where in 2009-10 he ranked fifth in the nation in scoring with an average of 22.5 points per game. Adrian also played professionally in the NBA, G-League and FIBA playing in 15 different countries. He has trained the Oakland Soldiers and Oakland Rebels. Adrian most recently has moved to the San Diego area to train at Southwestern College. He is also working with many AAU teams as well as with professionals in San Diego from the LNBP, Mexico’s top professional league. His latest venture is called AOV Mobile. This is a combination of in person and online mobile lessons. He has trained all types of players, from professionals to nationally ranked players to the beginning player. In this age, he is truly a visionary of our time. He brings his vast experiences and knowledge to his training sessions; Adrian also stresses the importance of the mental game. He has found his calling and it shows in his methods. He is committed to helping young basketball players and stresses not only improvement, but enjoyment of the game. The value of this training package is $395. Offering it to MSNJ is Adrian’s way of “giving back” to the community.

A PDF document will be sent to the email on file every Sunday for nine weeks.

This training is ONLY for players registered and paid for Winter League. 3rd – 8th grade only.

A WORD FROM AO:

“I believe if a young player is serious about getting
to an elite level in basketball, it starts at the early ages. As an athlete you need to know what it is like to work out on your own consistently without having to have someone next to you motivating you.
AOV Mobile was created to be the bridge between the player and self-accountability. To build self-confidence you must do something consistently over and over, from that comes confidence. Follow along each week with the program built for all skill levels. AOV Mobile.”